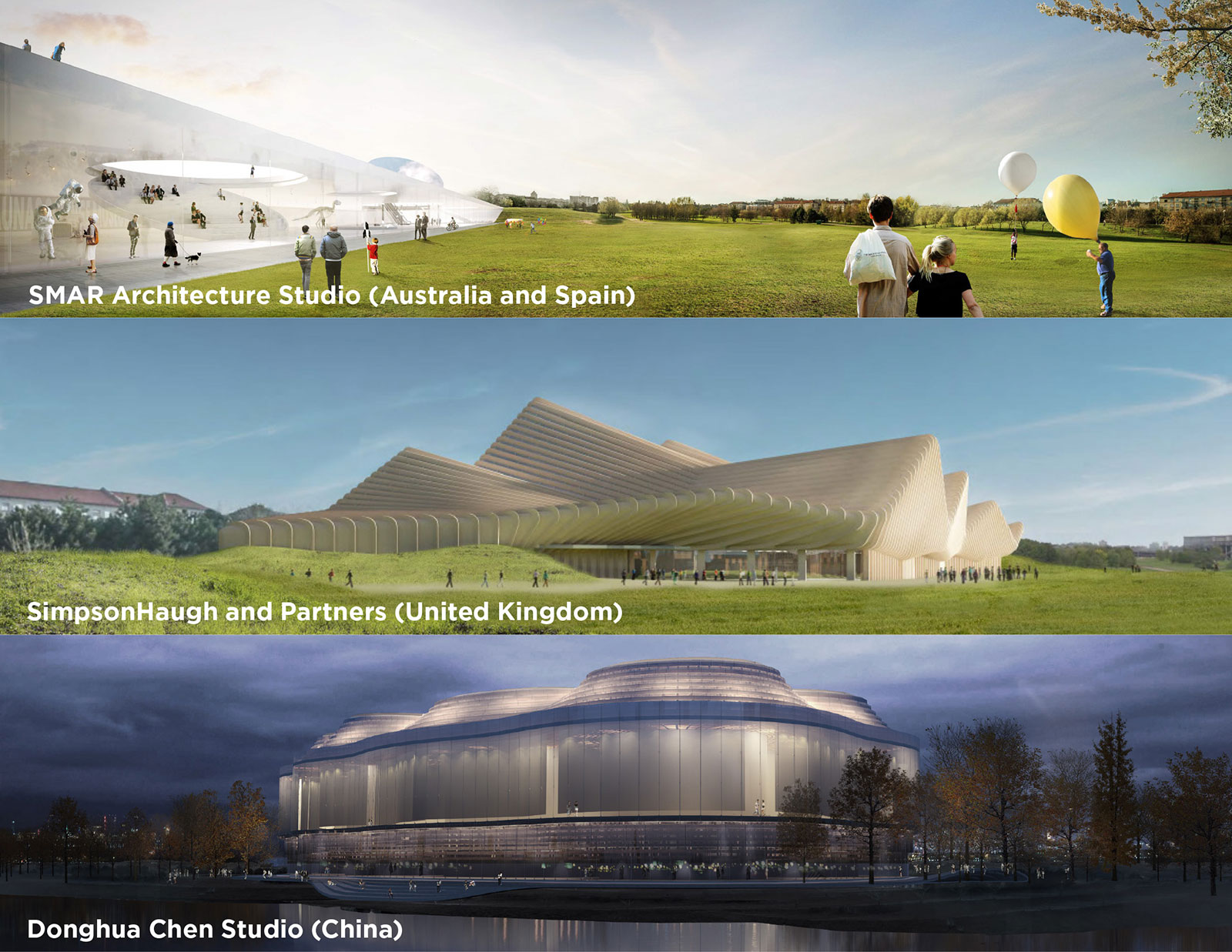 The Prime Minister of Lithuania together with the Mayor of Kaunas City Municipality today [30 September 2016] announced the three winners of the open anonymous design contest for the new circa €25M National Science and Innovation Centre of Lithuania in Kaunas, known as Science Island.

The successful practices come from across the world. They were (in order of rank):

Following the jury's selection of the three winning schemes, the authors' names contained in sealed envelopes were opened by the competition organiser yesterday. Lithuania's Prime Minister, Algirdas Butkevičius, announced the three designers this morning at a press conference on Science Island (also known as Nemunas Island).

Science Island will celebrate recent achievements in science and global technologies with the aim of inspiring visitors to expand their knowledge and support innovation. The Centre will focus particularly on environmental themes and ecosystems.

We have been delighted by the response of the international architectural community to this project. The contest has been the most popular in Lithuania's history: one hundred and forty-four teams entered from forty-four countries.

The initiative has clearly resonated, being both universally and humanly relevant, as well as of great national importance for Lithuania. We believe that Science Island will show how science can inspire positive change for the planet and humanity.

Science Island is part of our strategy to nurture a super-smart society attuned to learning, innovation and creativity. We were looking for designs that would connect with this vision and we found them.

I would like to warmly thank all the competitors for entering. We hope the experience, even for the unsuccessful, will develop their practice of architecture.

Each of the three winners could create a worthy addition to Kaunas, a city with a most distinguished architectural heritage and increasingly known as a key hub within the Baltics.

The three concept designs show originality, cultural confidence and a deep understanding of public engagement with science that the design must do as well as be. Science Island must inspire and lead, it sets the highest bar: a building where presence and performance are perfectly matched.

The design contest for this exceptional site in the UNESCO designated, and celebrated university city, Kaunas, encompassed the design of the Centre and an urban integration plan for Nemunas Island.

The three winners will now undergo a Negotiated Procedure without Publication of a Contract Notice with Kaunas City Municipality, who will select one architect or team to take the concept through to completion on site. Each of the winners will receive an honorarium of €15,000.

The three winning designs will be showcased on the competition website during October.

Five honourable mentions were also awarded. These were to the following practices:

The circa 13,000 sqm site area is positioned on the 33 hectare Nemunas Island, adjacent to the Zalgiris Arena and in close proximity to Kaunas historic Centras district.

The project will be managed by Kaunas City Municipality in cooperation with the Ministry of Science and Education and the Lithuanian Science Academy.

Kaunas City Municipality anticipates construction will begin in 2017 and intends the National Science and Innovation Centre to open in early 2018.

About the Science Island Design Competition

The competition was advertised in the Official Journal of the European Union (OJEU). For full details of the process please visit the competition microsite.

Malcolm Reading Consultants (MRC) is a strategic consultancy specialising in the selection of contemporary designers. MRC believes in the power of design to create new perceptions and act as an inspiration – either at the local level, or internationally.