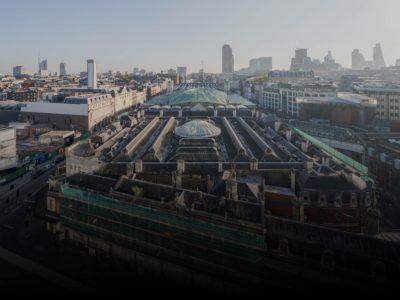 The new museum will curate the phenomenon of London – the leading world city. It will inspire visitors to explore the UK capital’s history and imagine its future, capturing all that’s essential and inimitable in London.

This is a project rich with possibility – focused on regenerating a nationally-significant landmark and creating an atmospheric and sophisticated museum environment, integral to the City of London’s developing Cultural Hub. The Smithfield area, close to the much-anticipated Crossrail interchange at Farringdon, is expected to experience rapid economic growth as new transport links improve access.

And with the present museum at London Wall stretched to capacity, the new site at West Smithfield, circa 25,000 square metres of available space, will enable the museum to show much more of its collection – an astonishing six million artefacts – and allow it to challenge museum orthodoxies and expand its audiences.

The new museum will be playful and energising, but at the same time attuned to the historic framework of Smithfield and its culturally-resonant civic realm. The fine, disused Victorian buildings comprising the General Market, the Fish Market, and the Red House (and the basement of the listed 1960s Poultry Market) will form both the fabric of the museum and part of its collection.

Smithfield epitomises the spirit of London, past and present. The area was first settled as part of Roman London, and it speaks to the capital’s working and social history, as well as to its modern incarnation: fashionable, sociable, design-loving and ever-changing.

The Museum of London West Smithfield International Design Competition seeks an inspired architect. The successful designer will need to deeply connect with the project, conceptualise a modern experience within this significant heritage ensemble, and subsequently work with the museum to refine the brief. The museum’s plans are fully supported by its two principal funders, the City of London and The Mayor of London.