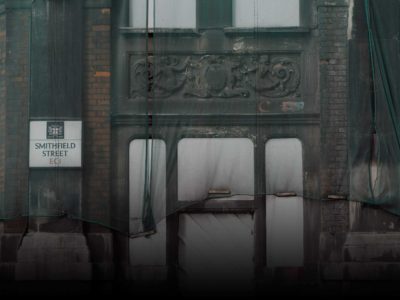 Many nationally important events have taken place in the area in and around Smithfield. In 1305, Scottish patriot William Wallace – also known as ‘Braveheart’ – was captured and put to death whilst fighting against English rule. In 1381, Wat Tyler, the leader of the Peasants’ Revolt, was put to death for apparently threatening the life of the young King Richard III.

During the religious turmoil of the Tudor era, hundreds of people were put to death, including the burning of more than 200 Protestant martyrs. Smithfield was one of London’s main execution sites in the sixteenth and seventeenth centuries. From at least 1123 until 1855, it hosted London’s biggest annual jamboree, the Bartholomew Fair, which was famous across Europe.

The livestock market expanded throughout the Middle Ages and Tudor period, as London grew and the demand for meat increased. Cattle were slaughtered on site up until the mid-19th century. The market continues to this day from its headquarters in Smithfield Central Market, making it the last historical wholesale market in central London.

Sir Horace Jones, the architect responsible for Tower Bridge, designed the 19th century Smithfield Market (East and West), basing it on the modular structural system pioneered by Paxton’s Crystal Palace, opened in 1868. Further extensions were built in 1875 (Poultry Market) and 1883 (Smithfield General Market). The Fish Market (1886) and the Red House (1899) followed in quick succession. The General Market building suffered damage from a V-2 rocket during World War Two, and the original Poultry Market building was destroyed by fire in 1958, then rebuilt in 1963.

The story of Smithfield provides a great insight into the relationship between London and the rest of the UK, with the extraordinary web of farmers and traders who supplied the city still evidenced today in the roads and shapes of the buildings and the vitality of activities that animate it.

To the west of Smithfield General Market is Farringdon Road, one of London’s greatest urban engineering achievements of the 19th century. Its construction included the building of the world's first stretch of underground railway, which later became part of the London Underground.

Today, Smithfield is a popular night-time destination, with a large number of bars, restaurants, and night clubs, and hosts ‘Smithfield Nocturne’, an annual event dedicated to bike racing.