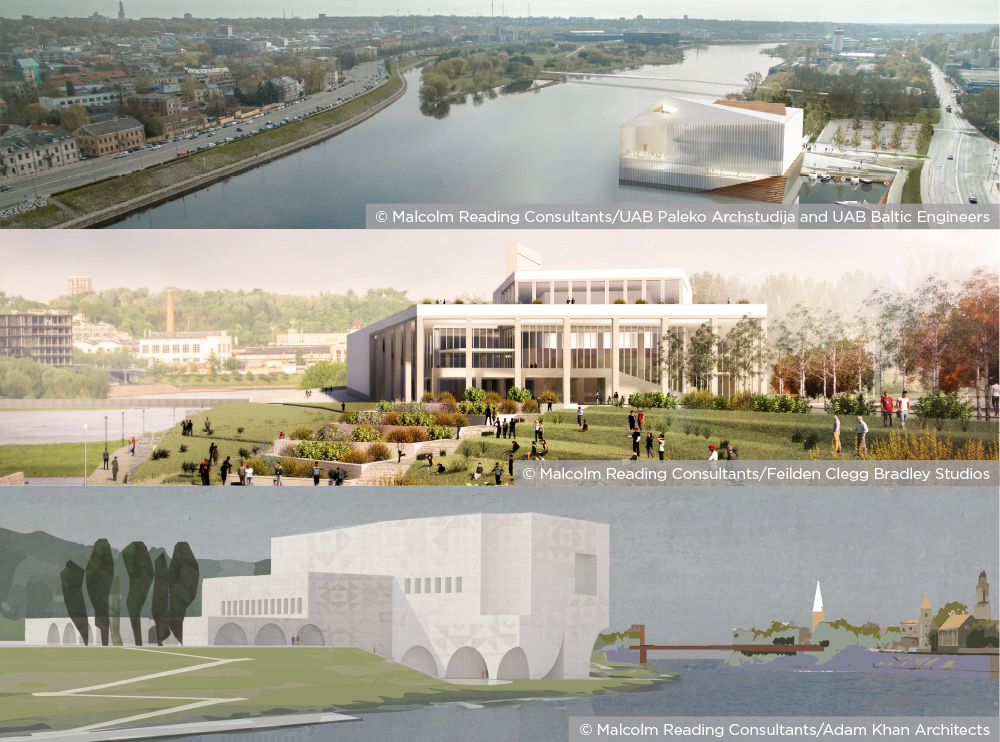 A further eleven practices also proceeded to the top band of evaluation, as per the previously published Competition Conditions. These practices were:

The six practices given honourable mentions were:

Following the jury’s selection of the three finalist schemes for this landmark building of circa 11,750 sq m, the architects’ names – contained in sealed envelopes – were opened this morning by the Competition Director Malcolm Reading at a press conference in Kaunas. Mr Reading read out the names of the 117 practices in order of competition ranking.

Selected as European Capital of Culture 2022, Kaunas is becoming increasingly known as one of the Baltics’ key knowledge and cultural hubs. However, despite a lively arts and music scene, Kaunas – and Lithuania – lacks a first-rank concert hall with the facilities and acoustic quality to host leading orchestras and ensembles.

As the brief to competitors explained, this new building on a riverside site with memorable panoramas to the Old and New Towns should also provide multi-functional spaces for conferences, congresses and symposia.

Given Kaunas’ exceptional architectural heritage – the city is en route to becoming a UNESCO Site for Modernist Architecture – the architectural quality and contribution to the cityscape were the essential criteria used to judge the finalist designs.

“The response of the international architectural community was exceptional – 117 entries from architectural practices from 36 countries speaks of how highly Kaunas is regarded worldwide. It was a privilege to receive so many creative, high quality concept designs.

“This is a complex brief that tested the competitors – and proved a strenuous but fascinating experience for jurors. The jury sat till late in the evening scrutinising and debating a diverse range of schemes.

“Ultimately, the finalists won us over with their understanding of the scale of the city, with sensibly planned and coherent strategies, and with an iconography that resonated particularly with Kaunas. Of course these are early concept designs and the final scheme chosen by the city will develop further.

“Kaunas is experiencing rapid change as it seeks to fulfil its potential in the 21st century. We want the Concert Centre to be an exemplary civic building that enriches Kaunas’ cultural life but also re-shapes the city – moving its epicentre closer to the river.”

“Čiurlionis was a polymath with the eye of an artist and the ear of a musician. The jury set out to find architects who in fulfilling the city’s brief could do justice to his creative legacy and create a memorable new cultural venue.

“Kaunas is a forward-looking place that is flourishing in meeting the challenges of the 21st century. The city’s determination to create excellence in public architecture by seeking out the best architects working today is inspirational.

“We congratulate the three finalists for the way in which they connected with the project’s namesake – they each honoured Čiurlionis distinctively by reinterpreting, representing and evoking his aesthetic.

“The jury was acutely conscious that many competitors will be disappointed but this is a demanding brief that required stamina and a depth of planning. It was humbling to see such a global and sincere response. We thank all the competitors for their work and for connecting to the project.”

The Concert Centre will be named in honour of Lithuanian polymath Mikalojus Konstantinas Čiurlionis, an outstanding Lithuanian painter, composer and writer who had a profound influence on modern Lithuanian culture and who is considered one of the pioneers of abstract art in Europe.

Gifted with a prominent site on the south bank of the River Nemunas, the Centre will comprise: a 1,500-seat Concert Hall of exceptional acoustic quality; a smaller, secondary hall; conferencing facilities; a restaurant, café and bar; back-of-house and office spaces; and underground parking.

The Concert Centre will help to revitalise this under-developed area of Kaunas, acting as a catalyst for further regeneration and re-orientating the city towards the riverbank.

The Municipality’s intention is that the three finalists will now undergo a Negotiated Procedure without Publication of a Contract Notice with Kaunas City Municipality who will select one architect or team to take the concept through to completion on site. Each of the finalists will receive an honorarium of €25,000.

The concept designs from the three finalists and six honourable mentions will be showcased on the competition website later in the autumn.

The competition was advertised in the Official Journal of the European Union (OJEU). For full details of the process please visit the competition microsite.

UAB Paleko Archstudija is an architectural studio based in Vilnius, Lithuania, and led by principal Rolandas Palekas.

UAB Baltic Engineers is a team of professional engineers based in Vilnius with both local and international experience, that provides high quality services in the areas of territory planning, designing, project management and engineering consultancy.

The practice employs 200 staff and has nearly four decades’ experience of cultural projects. London-based, they won the Stirling Prize in 2008 for the Accordia residential development in Cambridge.

The team is currently working on upgrades to the Southbank Centre in London, including refurbishment of the Queen Elizabeth Hall, the Hayward Gallery and the Purcell Room.

Recent projects include an extension to the Manchester School of Art (2013), the Leventis Art Gallery in Cyprus (2014), and The Hive (an integrated public and university library) in Worcestershire (2012).

Founded in 2006, the practice is based in London, United Kingdom.

Awards include RIBA Awards in 2010, 2012 and 2014, the Civic Trust Awards ‘Special Award for Sustainability’, and ‘Architect of the Year’ for public buildings in 2012.

Completed projects include housing developments and private residential dwellings, a gallery at the Yorkshire Sculpture Park, a visitor centre for the Brockholes Wetland Nature Reserve near Preston, and the New Horizon youth centre in King’s Cross, London.

Malcolm Reading Consultants (MRC) is a strategic consultancy specialising in the selection of contemporary designers. MRC believes in the power of design to create new perceptions and act as an inspiration – either at the local level, or internationally.